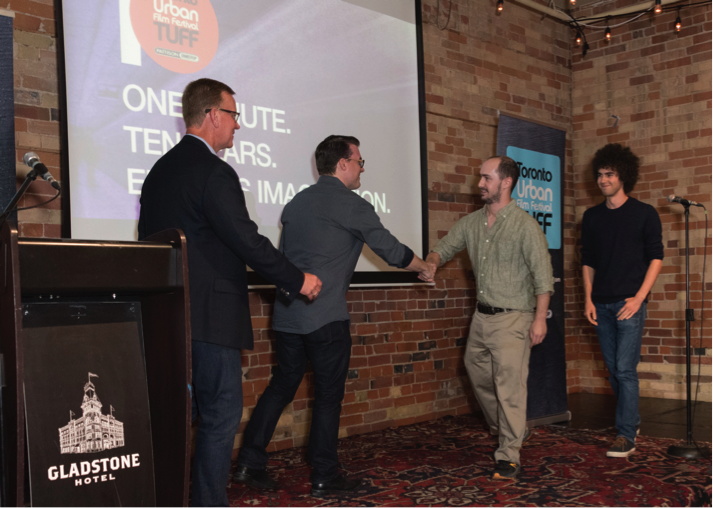 OVER $20,000 IN CASH AND PRIZES AWARDED TO FILMMAKERS AT GLADSTONE HOTEL AWARDS CEREMONY

TORONTO (September 20, 2016) – Toronto Urban Film Festival (TUFF), North America’s largest commuter film festival, celebrated its successful 10th edition with an awards ceremony hosted at the Gladstone Hotel on Sunday night. Over $20,000 in cash and prizes was awarded to talented filmmakers from Canada and across the globe. TUFF co-founder and Director Sharon Switzer, President of PATTISON Outdoor Randy Otto and Vice President/General Manager of PATTISON Onestop Cam Milne spoke at the ceremony that culminated in its first prize (selected by TUFF 2016 guest judge and Toronto Film Commissioner Zaib Shaikh) of $3000 cash from Pattison Onestop and a permanent license for Storyboard Pro software from Toon Boom Animation being awarded to Torontonians Spencer Ryerson and Peter Widdrington for their short film A NEW HOME.

“It was a remarkable year with tremendous talent,” says Sharon Switzer who was featured on CP24 earlier this September. “These were difficult decisions but the acclaim is well deserved. We thank our dedicated filmmakers for their contributions and continual support over the past ten years and look forward to another ten years of TUFF.”

A $200.00 workshop voucher from the Liaison of Independent Filmmakers of Toronto (LIFT). 2 FINISHIT Screenwriting passes and 2 Filmmaker Sandbox passes from Raindance Toronto.

A $1,500 grant for Lighting and Grip Equipment from William F White.

A Spacing Magazine gift pack, including a 1-yr subscription and $60 gift card. Two 10-pack of festival tickets for Hot Docs.

MOST ORIGINAL FILM BY A LOCAL FEMALE DIRECTOR – No Lies

A 1-Year Associate Membership and a $1,200 Programming Pass from Women in Film and Television Toronto. 2 Benefactor Memberships to the Inside Out LGBT Film Festival.

A $1,500 grant for Lighting and Grip Equipment from William F White.

$3000 cash from Pattison Onestop and a permanent license for Storyboard Pro software from Toon Boom Animation.

North America’s first, largest, and longest running subway film festival, the Toronto Urban Film Festival (TUFF), features silent, 60-second film video and animation from across the globe. Reaching more than one million daily commuters on subway platform screens across the Toronto transit system, TUFF blurs the line between art and reality within the utilitarian setting of public transit every September.

Art for Commuters (A4C) was founded in 2007 by Sharon Switzer, and brings over 100 artworks per year to the Pattison Onestop TTC subway platform screens. Through these projects, Art for Commuters offers a wide range of contemporary artistic voices the opportunity to showcase their work in the public spaces frequented by urban travelers.