The Press Release. Is it Dead? 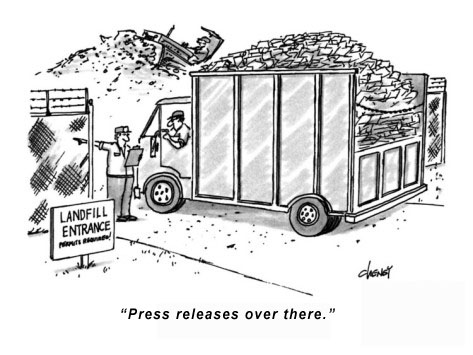 Not many people outside of our industry know exactly what PRs do, misled by pop culture myths of Samantha Jones glamour. One thing most agree on is that we write press releases and send them out, but the value of the press release is in question in an era when journalists are getting pitched via Twitter and text message. Long ago you could say that the press release was the bread and butter of public relations. But in the fast-paced era of social media, shortened attention spans and jammed inboxes, have we evolved past the press release? What’s the point of them any more?

The press release is dead

In their strict format, a traditional press release calls to mind an earlier era of public relations, when it was good enough for PRs to draft releases and throw them out, every which way, in the hopes that the right journalist would catch the news. We call this tactic the spray and pray. Blast the release to a media list and pray something comes of it. Blanketing, one-way communication can’t survive in a radically changed media environment, with less and less outlets, who have less and less time, money, staff and resources.

You know those mass emails that your aunt sends you that you’re too polite to admit you never read? Press releases are like that for journalists – easy to ignore and forget about.

Instead of the formalism of the head, subhead and traditional four-paragraph structure, writers and editors want PRs to get to the point.They will know if they’re interested in the story in a couple sentences, and the sooner you come to those sentences, the better.

Even when sending an email blast, there’s no reason a release shouldn’t resemble a personalized email or pitch rather than a corporate newsletter. As much as possible, press releases should be tailored to the audience they are being sent to. Instead of thinking about everything you need to put in the release, turn the equation on its head and ask, ‘Why are journalists reading it?’ What’s in it for them? If the client isn’t boring, and the story isn’t boring, than why should the release be?

All of that said, press releases still have a vital role to play. They are still the best way for you to develop your key messages, the best way to relay a story’s important facts and context, and the best way to frame the narrative in the way you want. But they should be thought of as the introduction (after which the PR will follow up) or the background information (sent after the PR’s piqued the writer’s interest).

There’s hope for our little friend the press release, as long as it evolves along with our ever-changing industry.