The Dark Stranger lurks onto the big screen 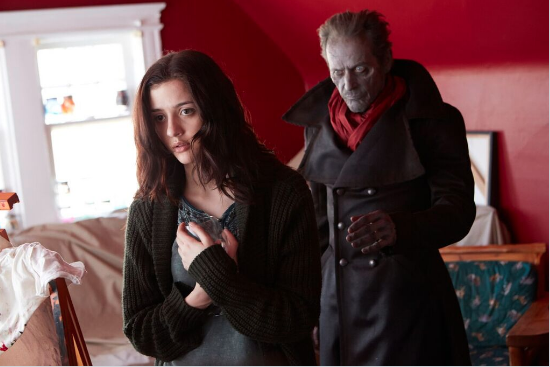 TORONTO (June 30, 2016) – Psychological thriller The Dark Stranger hits select theatres July 15, 2016. The film was directed by Canadian director Chris Trebilcock and shot on location in Toronto. Katie Findlay (“How to Get Away with Murder,” “The Killing”) stars alongside Stephen McHattie, Enrico Colantoni (“Veronica Mars”) and Mark O’Brien (“Republic of Doyle”).

The film releases across Canadian theatres July 15, with advance screenings in Ottawa July 6 and 7, before its July 26 release on VOD through Raven Banner Releasing.

Katie Findlay stars as Leah Garrison, a young graphic novelist struggling with depression and anxiety after the suicide of her troubled artist mother. Soon after her father (Enrico Colantoni) is visited by a suspicious art curator (Stephen McHattie) looking into her family’s past, she begins drawing a graphic novel featuring the ominous figure of the Dark Stranger, who seems to have an evil mind of his own. The story of the graphic novel — told through animated sequences — begins to parallel the events of Leah’s life, forcing her sanity into question and blurring the line between reality and fantasy.

The Dark Stranger plays July 6 and 7 at Mayfair Theatre in Ottawa and July 15 in Toronto, Calgary, Vancouver and Halifax on Cineplex Theatre’s Event Screens. The film is also scheduled for U.S. ancillary release across all major digital, EST, VOD, streaming, TV and DVD platforms in October by genre distributor, Terror Films.

Raven Banner Releasing is the Canadian distribution arm of Raven Banner
Entertainment – a full service company specializing in innovative and compelling genre films from around the world. Recent releases include Can Evrenol’s Baskin, Deathgasm, Turbo Kid, Wacken: Louder Than Hell and Cub. Upcoming releases include The Hallow, Bunny: The Killer Thing and The Dead Room. For more about Raven Banner please visit: www.ravenbannerreleasing.com

Terror Films is a new and innovative production, finance and distribution company specializing in the horror genre. The company is also set to release the Raven Banner film, The House On Pine Street, which was announced earlier this year. The two companies recently formed a distribution partnership in which Raven Banner Entertainment will handle all of Terror Films content for Canada.