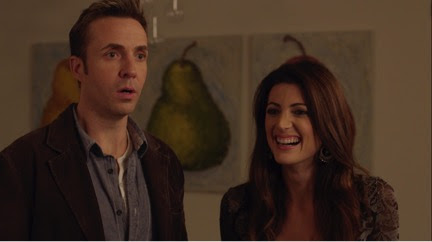 January 19, 2016 TORONTO – Independent comedy What an Idiot releases in Canada in select theatres February 5, and on demand and iTunes February 9. The film, which won the Best Comedy Feature at the Red Dirt International Film Festival and Best Director at the LA Comedy Festival, was written and directed by Peter Benson (Death Do Us Part), who stars, along with his wife, producer Julia Benson (SGU Stargate Universe), Lochlyn Munro (Scary Movie) and Kerr Smith (Dawson’s Creek).

What an Idiot is a risqué comedy about the ridiculous extremes people go to for love. Nick (Peter Benson) is a recently divorced ‘nice guy’ who falls head over heels for Jackie (Julia Benson), a tough-as-nails beauty who also happens to be his boss. In an effort to get close to her without getting fired, Nick blurts out that he’s gay. By taking sex out of the equation, the lie helps them get closer before threatening to break them apart.

What an Idiot screened at the 2014 Whistler Film Festival and the 2015 LA Comedy Fest, where it won Best Director and Best Actress. It won Best Writer (Feature Film) at the Canadian Comedy Awards, 2015, and Best Comedy Feature at the Red Dirt International Film Fest, 2015.

About levelFILM
levelFILM was launched in 2013 by David Hudakoc and Michael Baker and is headquartered in Toronto, ON.  Quickly establishing itself as a home for quality independent content, levelFILM’s recent titles include the heartfelt music drama Northern Soul, the Sundance favourite, and Cobie Smolders starrer, Unexpected, and Frank Hall Green’s stunning indie darling Wildlike, starring Bruce Greenwood and Ella Purnell.  Upcoming releases include Emile Hirsch and Craig Roberts starring in the SxSW film Just Jim, and the Toni Collette and Will Poulter Sundance drama Glassland, which won a Special Jury Prize for Best Actor Jack Reynor.