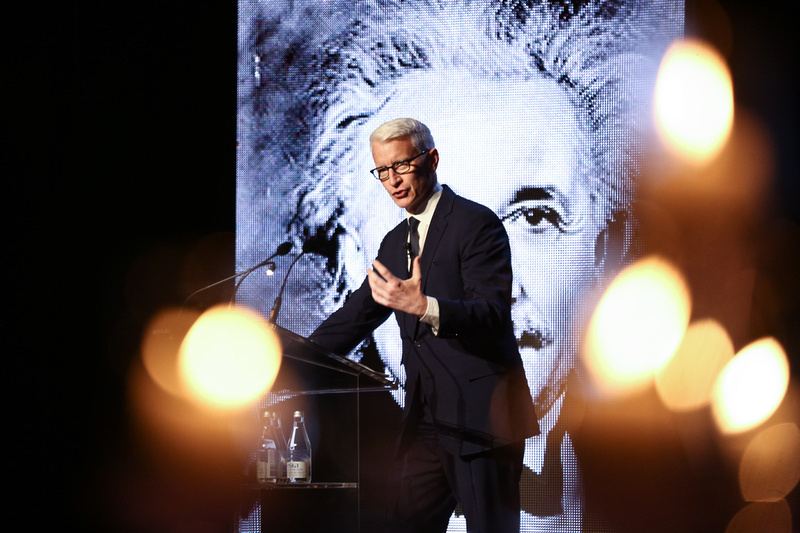 –      Winner of The Next Einstein Competition announced  –

TORONTO (May 16, 2016) — Anderson Cooper and Grateful Dead founding member Bob Weir were in attendance last night at a star-studded gala in support of the Einstein Legacy Project. Cooper hosted the Second Annual Einstein Gala, which featured a keynote speech addressing the importance of Einstein and the continuing contributions of his legacy. Weir spoke to the crowd about the importance of science, technology, mathematics and engineering, and treated the audience to a rare and exclusive performance.

The evening celebrated the Einstein Legacy Project’s various initiatives, including the world’s first 3D-printed book and The Next Einstein competition: an annual search for innovative ideas that best represent Albert Einstein’s legacy of discovery, invention and humanitarian ideals. The 3-D book, Genius: 100 Visions of the Future, includes contributions from 100 of the greatest icons and influencers of our time.

The Albert Einstein Foundation, created by Canadian Friends of the Hebrew University, launched the Einstein Legacy Project in honour the 100-year anniversary of Einstein’s Theory of Relativity.

“Albert Einstein was one of the greatest minds of our time and we are thrilled to have raised $2 million through the Einstein Gala to support future Einsteins,” commented Rami Kleinmann, President & CEO, Canadian Friends of the Hebrew University. “We are incredibly fortunate to be the guardians of the AIbert Einstein estate and bring together visionaries and leaders in celebration of his legacy and contributions to humanity.”

In addition to hosting the evening, Cooper presented the award to this year’s winner of The Next Einstein Competition, Aaron Friedland. As the third winner of this award, Friedland received a $10,000 prize for the digital book reading program developed by him and his organization, The Walking School Bus.

The gala also honoured recipients of the Jake Eberts Key of Knowledge Award, recognizing leaders who have bettered society through the advancement of knowledge and personal example. Academy Award®-winning actor Morgan Freeman is among the award’s past recipients. This year’s winners include: The Azrieli Foundation, represented by its Chair and CEO Dr. Naomi Azrieli; Shuki Levy, music composer, television writer, director and co-founder of Saban Entertainment; Jeff Martin, Founder & CEO, Tribal Planet and Co-Chair of Einstein Legacy Project; and Apotex Inc., represented by its Chairman Dr. Barry Sherman.

About The Canadian Friends of the Hebrew University

The Canadian Friends of the Hebrew University (CFHU) facilitates academic and research partnerships between Canada and Israel as well as establishing scholarships, supporting research, cultivating student and faculty exchanges and recruiting Canadian students to attend the university. The Hebrew University of Jerusalem (HU), founded in 1918 and opened in 1925, is Israel’s leading university.Albert Einstein, Martin Buber, and Sigmund Freud, were among the university’s founders, they were thinkers and visionaries whose genius inspired a university that would have no limits or borders. Ranked as one of the world’s leading research universities (ranked 3rd in Asia and 70th globally), HU lies at the forefront of the international academic and scientific communities. Many top prizes and awards have been won by its graduates and faculty including eight Nobel Prizes, and the Fields Medal in Mathematics. HU is a pluralistic institution where science and knowledge are advanced for the benefit of humankind in an atmosphere free of discrimination and prejudice.