Pokémon Go (and why it works) 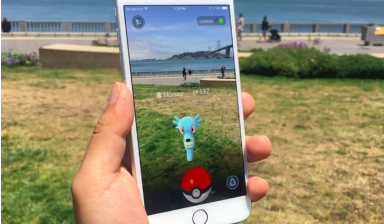 Pokémon is back in a big way. The popular Nintendo franchise, which reached its peak in the late 1990s, has returned with an innovative new mobile platform. Pokémon Go is everywhere, but why should you care?

In case you’ve been living under a rock, Pokémon Go uses your phone’s GPS and clock to detect where and when you are in the game and make Pokémon “appear” around you (on your phone screen). When in sight, you can catch them. As you move around, different and more types of Pokémon will appear depending on where you are and what time it is.

Other than being an addicting game, Pokemon Go’s rise comes down to its brilliant use of augmented reality.

Pokémon Go uses this technology to blend digital fantasy and tangible reality in new and exciting ways. Those who lived through the era of Pokémania know that all anyone really dreamed of was real-life Pokémon. After all, who didn’t want a pet Pikachu in the 90s?

There’s no denying that the franchise has the benefit of being able to capitalize on nostalgia of twenty-something’s, but that doesn’t discredit the game’s innovative use of augmented reality.

Instead of a marketing gimmick, Pokémon Go uses the technology as an influential form of storytelling. Video games generally give users the opportunity to play a character in a story, but Pokémon Go takes it further by placing the user as the main character in their own story.

Why does it work? In the 1990s, the Pokémon franchise created a world that users wanted to live in, and now augmented reality brings them much closer to that actuality.

Check out some other examples of augmented reality here.