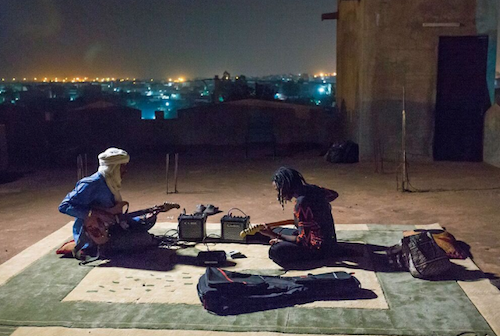 POLITICS AND CULTURE COLLIDE IN MALI BLUES DOCUMENTARY AT TIFF16

TORONTO (August 26, 2016) — A land imprisoned by Islamic extremism lays quiet as musicians flee from their homeland fearing torture and imprisonment in seasoned documentarian Lutz Gregor’s MALI BLUES. Gregor follows Oscar nominated musician Fatoumata Diawara as she returns home to perform her first concert in Mali since Sharia law was enforced in the West African country by the radical Islamists prohibiting the creation and performance of music.

Capturing the journey of musicians as they seek to bring blues, jazz, hip-hop and redemption to the heart of Africa, MALI BLUES is a powerful documentary about the heart breaking effects of an Islamic ban on music in the birthplace of blues.

MALI BLUES comes to you from powerhouse production company gebrueder beetz filmproduktion.  Specializing in documentary film, they are responsible for Sundance award-winning The Land of the Enlightened along with the co-production of the Oscar nominated documentary Open Heart.

As West Africa struggles to find peace, Fatoumata meets musicians banding together to seek peace and fight the eradication of Mali’s cultural identity – its music. The film features four groundbreaking musical stars: Fatoumata Diawara, Bassekou Kouyaté, Ahmed Ag Kaedi and Master Soumy that rebel against the extremists and seek to reconcile their beloved country by urging radicals to ‘explain your Islam.’

“Music is a universal language,” says documentary filmmaker, Lutz Gregor . “Music unites and gives a voice to those even in the most impossible of circumstances. That’s what we seek to explore in Mali Blues.”

MALI BLUES makes its North American Premiere at TIFF16. Celebrating the diversity of Mali art and music, the documentary features a variety of ethnicities and musical genres. Different perspectives of where the community came from, where it’s headed and the importance music makes in their life is shown throughout this inspiring collection of musician’s stories.