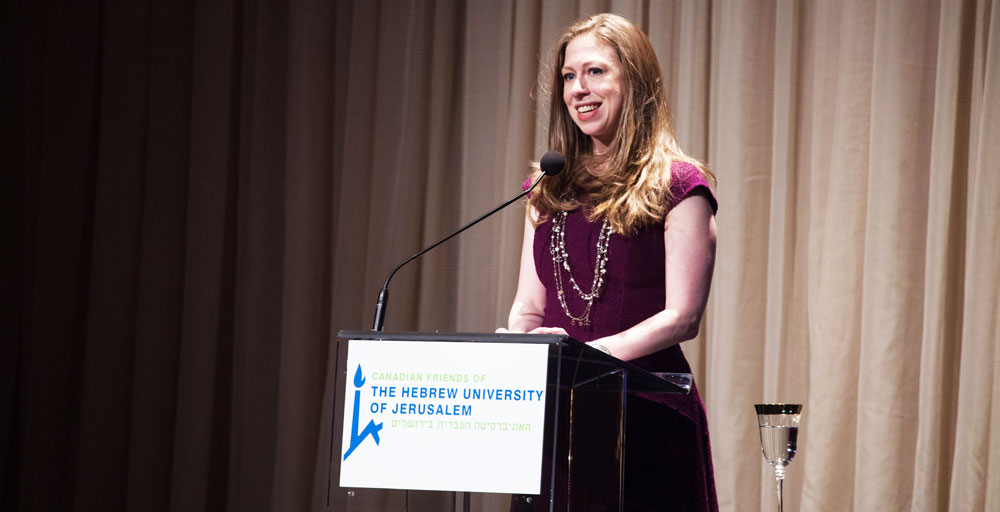 TORONTO, May 13 2015 – At a star-studded gala dinner last night, Canadian Friends of the Hebrew University announced four groundbreaking initiatives to celebrate the centennial of Einstein’s theory of relativity. Chelsea Clinton was the evening’s featured speaker.

The Next Einstein competition will launch its third annual search to find and nurture innovation and ideas that could change the world.

Cosmic Picture, the team behind the critically acclaimed documentary Jerusalem will produce an IMAX 3D film exploring the origins and the meaning of Einstein’s ideas. The film is currently in pre-production with a release date set for Q1 2017.

Lastly, the Einstein Museum, the first institution dedicated to continuing its namesakes’ legacy, will be built by the Hebrew University in Jerusalem.

In addition to co-founding the Hebrew University, Albert Einstein bequeathed his entire estate to the institution. The Hebrew University is ranked as one of the world’s leading research universities, having produced seven Nobel Laureates in the span of eight years.

To further the university’s scientific legacy, the Azrieli Foundation announced $10M in giving to the Hebrew University. In addition to the Azrieli Center for Stem Cells and Genetic Research, inaugurated in March 2015 to advance ground breaking science, funds will be available to support Israeli doctoral and Canadian post-doctoral students and young research faculty.

“Given just how remarkable Einstein’s legacy to humanity is, we wanted to create a suite of events that really creates a feeling of inspiration,” commented Rami Kleinmann, president & CEO, Canadian Friends of the Hebrew University. “What we planned is innovative, thought-provoking and awe-inspiring. We want the world to celebrate this great man’s contribution with us.”

The evening further included honouring a select group of exemplary Canadians recognized for their philanthropy, values and vision in education. This year’s recipients of the Einstein Legacy Award include: the Appleby family, the Austin family, Dzialoszynski-Waks family, the Halbert family, Lindenberg & Brown family, the Masters family, and the Mintz-Nyman family. Odette Levy was honoured with the Bronfman Prize for Exemplary Service and Merle Goldman was awarded the Bronfman Prize for Outstanding Professional Commitment.

About Canadian Friends of the Hebrew University

Canadian Friends of the Hebrew University (CFHU) facilitates academic and research partnerships between Canada and Israel as well as establishing scholarships, supporting research, cultivating student and faculty exchanges and recruiting Canadian students to attend the university.

The Hebrew University of Jerusalem (HU), founded in 1918 and opened in 1925, is Israel’s leading university. Albert Einstein, Martin Buber, and Sigmund Freud, were among the university’s founders, they were thinkers and visionaries whose genius inspired a university that would have no limits or borders. Ranked as one of the world’s leading research universities (ranked 3rd in Asia and 70th globally), HU lies at the forefront of the international academic and scientific communities. Many top prizes and awards have been won by its graduates and faculty including eight Nobel Prizes, and the Fields Medal in Mathematics. HU is a pluralistic institution where science and knowledge are advanced for the benefit of humankind in an atmosphere free of discrimination and prejudice. www.cfhu.org