June 22, 2015, TORONTO – The Italian Contemporary Film Festival wrapped its fourth year with a star studded awards ceremony and gala attended by over 1000 guests at The Ritz-Carlton in Toronto on June 19, 2015. As part of the closing night ceremonies, ICFF awarded The People’s Choice Award to Edoardo Leo for his film, Noi e la Giulia.

The gala was attended by Mischa Barton (Hope Lost) alongside the inspirational team behind AMBI Pictures, Andrea Ierovolino and Lady Monika Bacardi. Ms. Barton received an Award of Honour from the festival while Mr. Iervolino received the Honour of Recognition as Ambassador of Italian Cinema in the World. 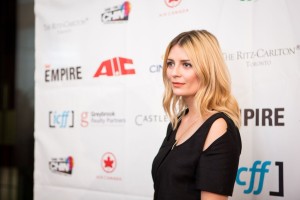 Sergio Navaretta, an Italian-Canadian director, was awarded the Castlepoint Numa Award for his film, The Colossal Failure of the Modern Relationship, at the gala. In addition, The Toronto Film Critics Association presented their award to The Invisible Boy (Il Ragazzo Invisibile) prior to the closing night ceremonies.

“Toronto is becoming a hub for Italian cinema,” said Cristiano de Florentiis, artistic director ICFF. “We are proud to contribute to the Canadian film industry and continue this successful partnership between Italy and Canada for many years to come.”

Earlier in the festival, ICFF was proud to bring Roberto Benigni and Nicoletta Braschi in collaboration with the Toronto International Film Festival to Toronto. The festival honoured them with lifetime achievement awards and a retrospective of their life’s work. In addition to Benigni, ICFF hosted film industry professionals in their second edition of the ICFF Industry Day at Screen Industries Research and Training Centre in Pinewood Studios in Toronto on June 18, 2015 surrounding the theme of animation.

The most successful year to date, ICFF was attended by its largest number of guests in six cities across Canada, bringing in over 25,000 guests in nine days. At the conclusion of each screening, guests were asked to rate the film using their tickets as ballots. Audience members rated all films with an average rating of 4/5 solidifying the place of Italian cinema in Canadian hearts.