The definitive guide to earned, owned and paid media 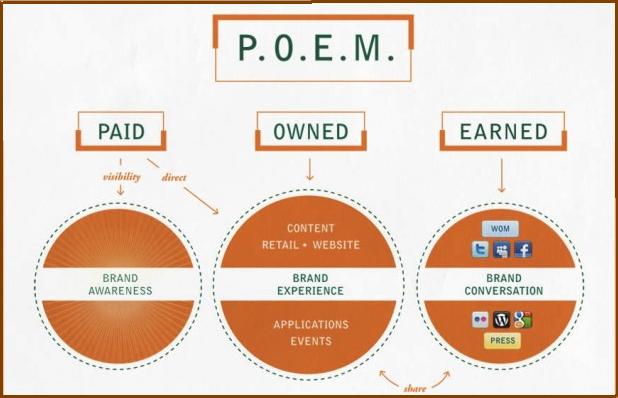 When it comes to owned, earned and paid media, we constantly see a lot of confusion and furrowed brows.

What’s the difference? Which one is right for my business? Do I need to be paying attention to all of them?

We’ll dive into to each category and make the case for combining all three.

As the name suggests, this is media that you pay for. It could be in the form of TV commercials or billboard ads but it also implies Google Ad Words campaigns and paid search, display advertising and the now ubiquitous Facebook ads.

Paid media definitely has its place – you just can’t argue with those Superbowl spots – but more than ever before we’re suffering from “ad blindness”.

This is any media channel created by your business.

You have complete control over your own media channels. You get to say what goes up, when and where.

While owned media may appear to be free, don’t be fooled. It takes time and energy to create a solid content strategy, execute it, pair it properly with a social media strategy, monitor it and review the data and adjust based on engagement metrics.

You can think of it as good old-fashioned word-of-mouth. In fact, word-of-mouth recommendations from friends and family are still the most influential, as 84% of global respondents in 58 countries told a Nielsen online survey that this source was the most trustworthy.

Earned media is where public relations comes in. The role of PR pros is to work skillfully with the media to convince, persuade and cajole them into writing about, interviewing or filming the companies and organisations we have as clients.

Today, it’s also the role of the PR pro to reach out to non-traditional media like bloggers and social media influencers too.

Which one is right for you?

Now that the definitions are clear, it’s time to figure out which approach is right for your business.

But the truth is, in today’s digital landscape all the pieces of media puzzle work together. An integrated approach is likely what will serve you best.

With paid efforts, get that content strategically placed where it can be spotted by your target audience, and finally, earn the audience’s trust and support and turn them into your brand advocates.

Want help figuring out how to create a strategic marketing plan that pulls together owned, earned and paid media? Drop us a line, we’d love to hear from you.