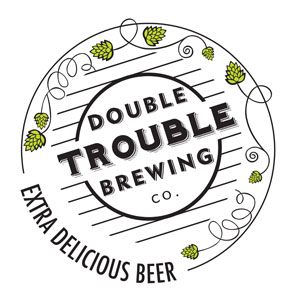 The story of Double Trouble Brewing Co. began on a university campus in 1998. After becoming fast friends at Trent University, Claude Lefebvre and Nathan Dunsmoor serendipitously ended up working at a small craft brewery together. It was then that the pair promised, likely over a pint, to open a brewery one day. They would brew all for the love of beer.

Over the next 10 years both Claude and Nathan continued to work in breweries, developing their skills and furthering their love of a good craft brew. Slowly, the friends began dreaming of what they would create. Dreams became strategies, strategies became legitimate plans and in 2012 the bottles aligned and Double Trouble Brewing Co. was launched.

From there the duo began drinking with a sense of purpose – they had to unlock the right tastings and refinements, working to create something special. The company’s flagship brew, Hops and Robbers, launched in Feb 2013. This same care goes into the development of every brand Double Trouble Brewing Co. introduces.

HI-RES IMAGES BELOW FOR DIGITAL MEDIA, FOR PRINT MEDIA CONTACT US