Who Owns What in the Canadian Media Landscape 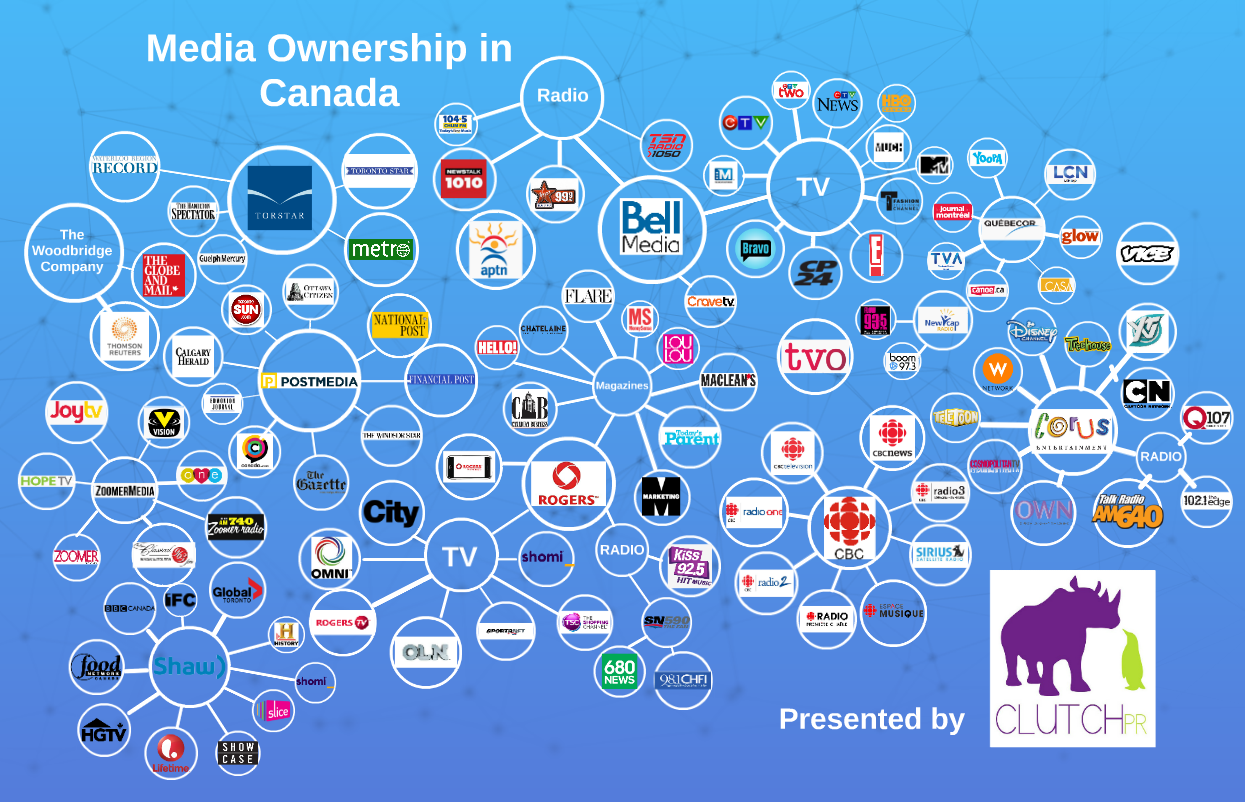 Who owns what in the Canadian media landscape is a question that occurs to both beginner publicists and seasoned PR veterans, particularly because it changes constantly. Just when you think you know the difference between Rogers, Shaw and Bell Media, there’s another consolidation and the cards get shuffled once again.

If you can keep it straight, knowing which company owns which outlet is a useful education for public relations professionals. As more and more outlets come under the umbrellas of parent companies and share news desks and editors/producers, publicists can save time and energy by pitching stories to a central contact. They can also familiarize themselves with the operating structures, content calendars and political leanings of the major media players.

Pictured above is ClutchPR’s (by no means exhaustive) media ownership tree, outlining the major parent companies and the main newspapers, magazines, TV, radio stations and online streaming services they own. Although we tried to include as many national titles as possible, for the sake of keeping the infographic legible, Ontario and Toronto outlets took precedence.

When Toronto Star publisher Joseph Atkinson passed away in 1948 he attempted to leave the newspaper to his charitable organization, but the Ontario provincial government passed a special law prohibiting charities from operating profitable entities such as daily newspapers. Thus, TorStar was born.

Along with its namesake the Toronto Star, TorStar also owns the Hamilton Spectator, the Waterloo Region Record, the Guelph Mercury, versions of the commuter paper Metro in Toronto, Vancouver, Ottawa, Calgary, Edmonton, Winnipeg and Halifax, and 116 community papers.

Up until 2014, TorStar owned Harlequin Enterprises, of romance novel fame, before selling it to Harper Collins.

In addition to the Globe and Mail, the Woodbridge company, a holding company for the Thomson family, is the controlling shareholder of Thomson Reuters.

Out of the ashes of Canwest’s bankruptcy in 2009 rose Postmedia which acquired its newspaper assets. They include the Calgary Herald, the Edmonton Journal, the Montreal Gazette, the Ottawa Citizen, the Regina Leader-Post, the Vancouver Sun and the Windsor Star, in addition to the tabloid Sun family: the Toronto Sun and its cousins in Calgary, Edmonton, Ottawa, Winnipeg and Vancouver’s The Province.

Initially founded as Rogers Vacuum Tube Company in 1925 by Edward Rogers to utilize his invention of the battery-less radio receiver, Rogers has grown to become one of Canada’s largest and diversified media companies.

Through Rogers Media, Rogers owns Rogers TV, OMNI, the Shopping Channel, OLN, Sportsnet and City, after acquiring it from CTV in 2007. They have also got into the online streaming market with Shomi (which it co-owns with Shaw). Rogers Radio operates 53 stations, including 680 News, Kiss 92.5 and 98.1 CHFI.

Television stations in the Bell family include CTV and CTV News, CP24, MUCH (formerly MUCH Music), Bravo, the Comedy Network, Space, E! and HBO Canada.

Originally short for Newfoundland Capital Corporation, NewCap is the second largest private sector radio broadcaster in Canada, after Bell. It owns all but two radio stations in Newfoundland, 22 in Alberta and Toronto’s Flow 93.5 and Boom 97.3.

Spun off from Shaw in 1999, Corus Entertainment has holdings in radio, publishing, and television industries. (Although the Shaw family owns both companies, they are independent of each other.) Corus’s specialty is children’s programming through YTV, Teletoon, Treehouse, and Canadian versions of Nickeleodian, the Cartoon Network and the Disney channel.

In addition, Corus owns the W network, the Oprah Winfrey Network Canada and 80 percent of Cosmopolitan TV. They also own radio stations Talk Radio AM 640, 102.1 The Edge and Q107, among many others.

Zoomer Media is the group of media entities controlled by Moses Znaimer, formerly of CityTV. In 2007, Znaimer acquired Kemur Publishing and renamed the Canadian Association of Retired Persons (CARP) magazine ‘Zoomer’, for ‘baby boomers with zip.’

Zoomer owns radio stations Zoomer Radio 740AM and Classical 96, and TV stations Vision and One.

And then, of course, there’s the Canadian Broadcasting Company. The crown corporation serves as Canada’s national public radio and television broadcaster, with owned and operated stations stretching from sea to sea. In addition to the CBC and CBC News networks, and CBC Radio 1, 2 and 3, other assets include Radio Canada International and 40 per cent of Sirius Canada.

The Aboriginal People’s Television Network grew out of the Therrien committee report in 1980, which argued that there was a need for a network to cater to the needs of Canada’s Northern Aboriginal communities and help preserve their cultures and languages. Originally launched as Television Northern Canada in the early 1990s, the channel rebranded as APTN in 1999, the same year they began to be broadcast across Canada.

Is there a major media player we missed? Let us know on Twitter. Let the debate begin!