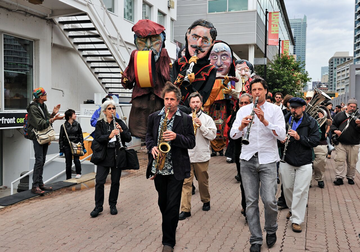 — North America’s largest showcase of global Jewish performing arts and culture features world-renowned Abraham Inc., The Klezmatics and the Canadian Premiere of Yiddish-language Death of a Salesman, among over 250 international artists —

The Ashkenaz Festival, North America’s premier festival of global Jewish music and culture returns to Toronto’s Harbourfront Centre for its 11th year from August 30 to September 5. The weeklong festival celebrates a wide range of Jewish arts and culture with artists from across the globe. Festival programming includes music, film, theatre, dance, literature, visual arts and a new Jewish food component.

The headlining acts include the Grammy award-winning ensemble The Klezmatics and Jewish-funk super-group Abraham Inc, which features klezmer clarinet master David Krakauer, legendary funk trombonist of James Brown and George Clinton Band fame Fred Wesley, and Yiddish hip-hop renegade Socalled.Since it began in 1995, the Ashkenaz Festival has evolved into a broad celebration of Jewish and cross-cultural art and performance. The 2016 line-up includes exciting programming, featuring over 90 presentations and more than 250 individual artists from across 12 countries.

“Ashkenaz represents the cutting-edge of contemporary Jewish artistic creation,” said Eric Stein, Artistic Director of The Ashkenaz Festival. “It’s a dynamic international scene, producing some of the most exciting music and art being made today. The festival reflects as much of our own city’s multicultural flavour as it does the eclecticism and vibrancy of Jewish arts in the worldwide diaspora. I’m constantly inspired by the cross-cultural exchange and diversity of both the artists and audiences at our festival.”

The festival concludes with the family-favourite Ashkenaz Parade on Labour Day. The parade finale— produced by Shadowland Theatre—features a procession of music, dance, theatre, giant puppets and stilt walkers along the waterfront.

Other programming highlights include:

For a full list of programming, please visit www.ashkenaz.ca. Additional attractions, as well as full performance and workshop dates and times, will be announced shortly. The Ashkenaz Festival is coproduced with Harbourfront Centre.