Artists of the Month – Erinnisse and Patryk Rebisz 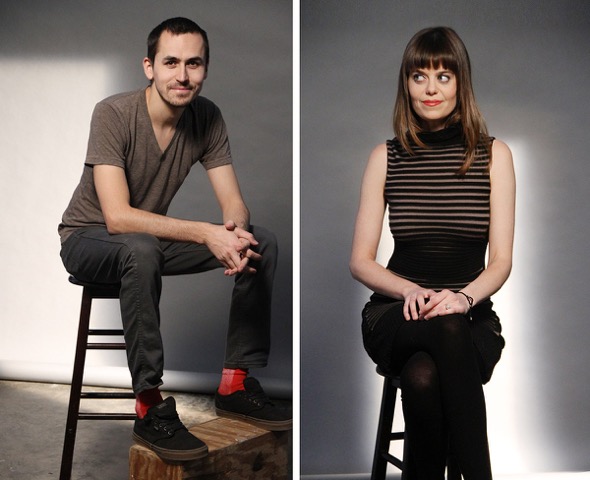 Each month, we feature an artist who has caught our attention. They could be in theatre, film, music or visual art. The point is we think they’re kick ass and you should know who they are.

September’s artists of the month Erinnisse and Patryk Rebisz, the film directors behind the documentary Shoulder the Lion,  screened earlier this year at Hot Docs.

4.Who’s on your team? Patryk: Me and my wife, who edits and produces. She’s incredible with people!

5. Five things you can’t live without?

Patryk: Tea, my eyes, good food and the fear of passing time.
Erinnisse: Ultimately, I can live without anything – maybe the only thing I can’t live without is sleep – which has also been my biggest fear about becoming a parent.

P: Matisse’s exhibition of cutouts at MoMA.I never liked this period in his artistic output as those cutouts appeared (as seen in reproductions in various art books) gimmicky and devoid of depth. Seeing the artworks in person gave me whole new perspective – it was a profound experience seeing the lines, changes of mind, where the cut was patched up later on. Lesson learned: see art in person, not as its facsimile in other media.
E: Seeing Anna De Keersmaker perform “Violin Fase” is the best show I’ve been to recently.

P: I’m planning to finish a script for our arty Godard/Rohmer/Kieslowski-influenced feature film “narrative” about possibilities of love in our times.
E: Having our first child, starting development on our “narrative”, and finishing our festival tour with Shoulder the Lion.

8.Most memorable moment of your career thus far?

P: In a super banal circumstances I had this Archimedes “Eureka!” moment where the structure of screenwriting became clear. It became apparent that books teach us to express ourselves in the wrong way.It should go:

1) have something to say;

2) find the appropriate form to express your idea;

3) find a story that gives your idea a form, a skeleton onto which you can build.

9.What would you be doing if you weren’t doing this?

P: As filmmaker, I get to live out mini-fantasies everyday. As a kid I wanted to be a firemen, and I got a glimpse of what it would be like when shooting a commercial for a firemen’s union. I wanted to be a pilot, and I got to experience it when shooting a commercial with multiple airplanes. I wanted to argue in court as lawyer… well, we’ve all shot our share of lawyer commercials.
What I’m trying to say is that as filmmaker you get to gain a glimpse of those lives without having to live it everyday. Everything is always new and exciting. So no, I wouldn’t be doing anything else!
E: Living in Venice playing the piano in the Piazza Del San Marco.

10.What advice do you have for people who want to get to where you are?

P: If you want to do films, the last thing you should expose yourself to should be other films as they signify the already digested works of the past. Instead, read (literature, philosophy, history), look, pay attention to the world around you. Expose yourself to as much culture as possible. At the same time, try to define who you are. In today’s world knowing the true self is close to impossible but without that knowledge we risk floating around without purpose. Attempt to find a way to peel the layers imposed by the world to glimpse your true self.
Category: Artist of the Month