A Date With Miss Fortune scores a date with Canadian audiences 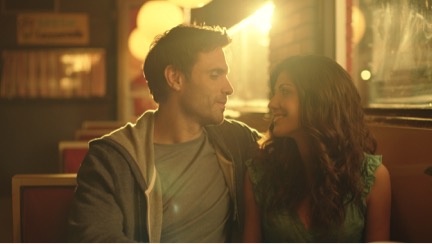 On January 28, 2016, a red carpet media screening will be held at the Yonge and Dundas Cineplex Theatre (10 Dundas Street E., Toronto). Stars from the film will be in attendance.

In the spirit of hits such as My Big Fat Greek Wedding, and inspired by Scott and Sousa’s real-life experiences as a couple, A Date With Miss Fortune follows Jack (Scott), a struggling sitcom writer and Maria (Sousa), a superstitious beauty, who fall in love after an accidental meeting at a diner. After a romantic start, the couple must cope with their competing worldviews, Maria’s disapproving Portuguese-Canadian family, and a warning from her favourite psychic, who claims Jack is not the man for her.

“We’ve had a great response from audiences,” says Sousa. “Men and women from different cultural backgrounds find something to relate to.”

A Date With Miss Fortune had a successful theatrical release in Portugal and received a positive first showing at the annual American Film Market in November 2015. It will be released in Canada through Northern Banner Releasing on February 5 and on VOD and home video on May 9. In the US, Vision Films will release the film, with select theatrical screenings handled by First Pond Entertainment.

Northern Banner Releasing is the sister company of Raven Banner Releasing, focusing on prestige pictures, documentary, comedy and family films for the Canadian market. Upcoming releases include Sean Garrity’s Borealis starring Joey King, Jonas Chernick, and Kevin Pollak, and Embrace of the Serpent, which has been short-listed for Best Foreign Film for the 2016 Academy Awards™.